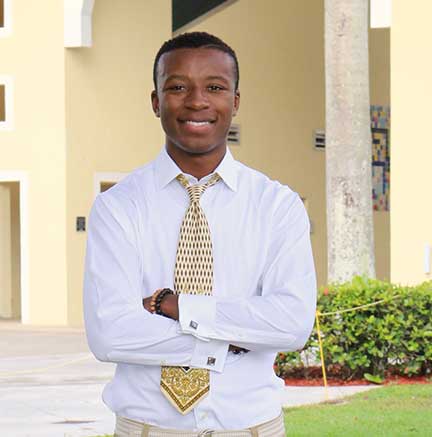 Steven Banks is a senior at American Academy, and he has always been curious about airplanes. When he was four years old, his dad was looking through an old box of things and came across some old photos from WWII. "I saw an old plane in the photo that fascinated me," Steven recalls.

Since then, he always looks up in the sky when an airplane flies by and wonders where it's going and where the people on the plane are traveling.

But it wasn't until he came to the Academy that his true interest in aeronautics surfaced.

"Coming here, I realized I can actually become what I want to be because everyone around me wants to go to college and be successful," Steven said. That's when he set a goal to become a pilot.

Today Steven is "flying high" because he was just accepted to his dream school, Embry-Riddle Aeronautical University, which is ranked one of the top colleges in U.S. News and World Report's "Best Colleges" rankings.

"My dad would always tell me, 'You can become anyone you want to be. Don't let anyone or anything stop you.' Now I see a future doing exactly what my parents and everyone around me taught me to do."

Steven credits his guidance counselor, Dr. Michel, for being a huge help in the success he has had with his college acceptances. He has already been accepted to five colleges, and he will be attending Embry-Riddle in Daytona Beach in the fall of 2017. Now his dream of becoming a pilot is now a reality.